Farms of the future

Farms of the future

Virtual fences, drones as pest control, precision agriculture and a twist on Tinder – for bulls. Emma Mulholland discovers the breakthrough technologies that are here now and on the horizon, designed to boost safety, sustainability and profitability in the farming sector.

Are stockyards and sale days – even the humble barbed-wire fence – set to go the way of the drover? Australia’s agricultural landscape is fast changing but if there is one certainty, it’s that an explosion of easy-to-use, farmer-friendly agtech has forever altered the way farmers operate. Forget merely waiting for rain – today’s growers are monitoring soil moisture and leaf wetness, creating prescription maps for fertiliser application and predicting yields months ahead of harvest.

Automation and data collection are delivering real productivity gains and local entrepreneurs are leading the charge. Among them is Ros Harvey, founder of Sensing+ for Agriculture, an artificial-intelligence platform that tracks a property’s microclimates, helping farmers know when to plant, protect and harvest. She says local producers are hungry for new technology. “Growing is a risky business. If you get 30 seasons in your life, you want to make sure you get a return for every one of them.”

Here, we take a look at the cutting-edge tools taking the guesswork and back-of-the-envelope calculations out of the growing game. 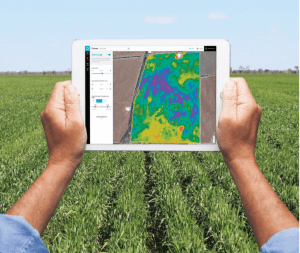 Precision agriculture – the practice of identifying and responding to variations in a crop – is generating big buzz right now. For farmers who want to dip their toes in, there’s DecipherAg, a software program developed by Wesfarmers. It combines biomass imagery from multiple satellites to help producers monitor crop growth, arrange soil sampling, create prescription maps for fertiliser application and compare trends over several seasons. “We’re hoping to broaden the appeal of precision agriculture so we’ve concentrated on what’s really important to growers,” says spokesman Frank D’Emden. “That’s things like viewing up-to-date imagery, overlaying it with their paddock boundaries and soil analysis results and having a clean interface that’s easy to understand.”

“Farmers can move the ‘fence’ daily for cell grazing or to protect a riparian zone – you literally just draw the boundary on your computer.”

Barbed-wire and electric fences could become a thing of the past, thanks to Melbourne-based company Agersens’ “virtual fence” device. Developed with the CSIRO, the eShepherd collars train cattle to stay behind an invisible fence by emitting a noise when they approach the boundary; if they continue, the neckband gives off an electric pulse. “Farmers can move the ‘fence’ daily for cell grazing or to protect a riparian zone – you literally just draw the boundary on your computer,” says Agersens’ Sally Haynes.

“Because we train the cattle using sounds, as well as animal behaviour and welfare learning principles, they aren’t afraid of approaching the fence. They might get lots of audios but they just know they need to turn around.” The collars produce a less intense shock than an electric fence and there’s no risk of cattle or native animals getting tangled in wire.

Buying bulls is about to get easier with the launch of DeSireBull. This time next year beef producers will be able to use a smartphone app to select the best bull for their breeding needs. A bit like Tinder? Not quite, says project leader Matias Suarez. “Other countries have tools like Tinder but they’re pretty simple: if you like the look of the bull, you swipe right. We want producers to make decisions based on science and data.”

Developed by NSW’s Department of Primary Industries, the platform rates bulls according to Breedplan, a genetic evaluation system used around the world. “Breedplan is useful but it was developed with the stud breeder in mind,” says Suarez. “We’re trying to provide commercial producers with a tool that speaks their language – the information is pretty much the same but the algorithms do the thinking on their behalf.”

Data collection has done great things for the dairy industry; in fact, with better management and genetics, farmers are getting double the milk yield per cow than they were 40 years ago. And for an industry facing tough times, every drop counts. Sunshine Coast dairy farmer Ray De Vere has boosted his bottom line by kitting out his Jersey and Brown Swiss cows with Allflex fertility monitoring collars.

Used on dairy and beef cattle, the collars track animals’ movements and a computer program notifies farmers of breeding windows. If there’s a problem – say a cow is sick or the milkers spook – he is notified by text message. By knowing the optimum time to breed his cows, De Vere has been able to reduce his average days in milk, leaving him $65,000 better off. “I can get results that are 96 per cent accurate,” he says. “That’s gone from being about 40 to 50 per cent when we were visually monitoring the cows.”

Uranium mine in Kakadu needs a better clean up plan

QLD mining’s reputation is in the pits

How an agtech company is now helping the mining industry

Thomas joins the Decipher team as part of work experience

Find out about our Senior Remote Sensing Scientist, Hasnein

What is variable rate technology?

Why is soil sampling important in agriculture?

Decipher is now owned by