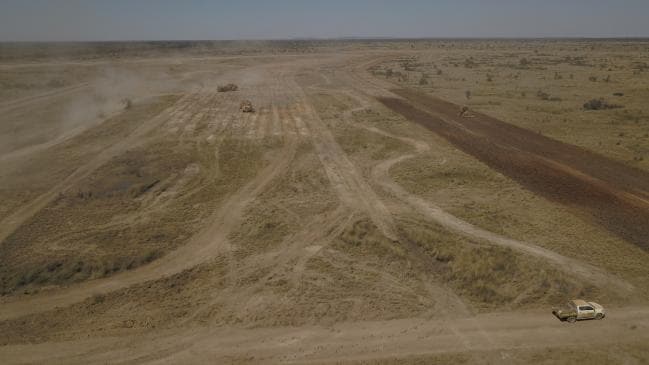 Indian mining giant Adani has had to hand over millions of extra dollars to the Queensland government as financial security to rehabilitate its central Queensland coalmine site in the event of environmental damage.

The Australian can reveal that last year the state government twice increased the amount Adani had to pay in financial ­assurance, hiked from $11.6m to $15.8m in April and then to $24.8m in November.

Adani is up to date with its payments, which are required of all Queensland resources companies to protect taxpayers from costs ­incurred to reduce environmental harm or carry out rehabilitation, should miners fail to meet their obligations.

The Indian conglomerate has started construction on its controversial Carmichael coalmine in central Queensland’s Galilee Basin, despite ongoing protests from green groups. It is forecast to extract 10 million tonnes of thermal coal each year, with the mineral to be transported to Abbot Point port, near Bowen in the Whitsunday region, via a 200km rail line.

The project received the last of its environmental approvals from the state government last year, after Labor’s federal election loss was partly blamed on the party’s equivocation on Adani.

Days after the election result, Premier Annastacia Palaszczuk declared she was “fed up” with her own government’s approvals ­process and told the state’s ­Co-­ordinator-General to set deadlines for the outstanding items.

Documents obtained by The Australian show Ms Palaszczuk was regularly and thoroughly informed by advisers about the Adani project at that time, with the mine included in her “contentious issues” briefing papers.

A May document confirmed that existing financial assurance of $11,559,731 was held by the state government as a bank guarantee and as cash in a Department of Environment and Science bank account. On April 5, 2019 , the department made the decision to increase the financial assurance to $15,824,063. Adani paid the extra amount by May 24.

This type of arrangement is standard for resources companies in Queensland but it is rare for the specific figures involved to be made public.

The decision followed an overhaul of the entire financial assurance scheme by the state in April, after the Queensland Treasury Corporation warned that the old system did not protect Queensland’s financial interests, was expensive for industry and did not promote good environmental outcomes.

It was estimated the state’s resources industry had created 220,000ha of “disturbance”, with an estimated rehabilitation cost of $8.7bn. The new scheme changed the way financial assurance was calculated.

Adani was again required to pay more in November last year, when the department determined a revised “estimated rehabilitation cost” of $24,851,284.91.

A departmental spokesman said the amount was increased because Adani had “updated its operational plan and disturbance map to increase the mine infrastructure area and water storage”.

“This change did not increase the total area authorised for disturbance,” he said.

An Adani Mining spokeswoman said providing financial assurance for rehabilitation costs was “consistent across the resources industry and is part of the regulatory process”.

Adani and Queensland Treasury officials are still trying to negotiate a royalties deal.

Originally published by The Australian.

What is mine rehabilitation?

What are the different types of mine rehabilitation practices?

Is my Progressive Rehabilitation and Closure Plan (PRCP) compliant?

Organisations carrying out mining activities in Queensland (QLD) are legally obligated to rehabilitate the land. A progressive rehabilitation and closure plan (PRC plan) is a critical element of the QLD Government’s Mined Land Rehabilitation Policy. When submitting a site-specific application for an Environmental Authority (EA) for a new mining activity relating to a mining lease, applicants are required to develop and submit a proposed PRC plan as part of their application. Download your free guide below to find out: https://www.decipher.com.au/MineRehabilitationGuideQLD