Australia deals with the job of cleaning up mining boom past

Australia deals with the job of cleaning up mining boom past

A slowdown in Australia’s decades-long mining boom has left companies and communities grappling with what to do about closed or abandoned mining sites.

Australian law requires the mining companies to pay for and carry out the rehabilitation of their former sites, but the process is an internal one that doesn’t require the input of local communities.

Some companies are taking a more open, collaborative approach, but difficulties remain as a result of communication and cultural differences between corporate visions and communal, often Aboriginal, wishes for the restoration of the land. Environmental problems also abound, with the failure to properly restore the topsoil resulting in the restoration of land that’s effectively sterile, although promising research is being carried out in this field.

See what score you get for your Rehabilitation and Closure program

For example, about 80 kilometers (50 miles) south of Darwin and 14 km (9 mi) northeast of the town of Batchelor lies Woodcutters, an open-cut lead and zinc mine that shut in 1999. Here, at the top end of Australia, live the Kungarakay and the Warai peoples. Not many Aboriginal people were employed at Woodcutters, nor were they involved in the rehabilitation and closure plan. At the end of operations, the company left 700 hectares (1,730 acres) of denuded land.

For the past few decades, the mining industry has had an essential role in Australia’s economy. But as the mining boom dwindles, more plants are shutting down, leaving behind environmental disasters and social legacies.

Australia isn’t the only country dealing with mine retirement

In the Indonesian part of Borneo, hundreds of coal mining pits have been left unfilled, although the law requires mining companies to fill in those no longer in use. Dozens of children have drowned in the abandoned pits. 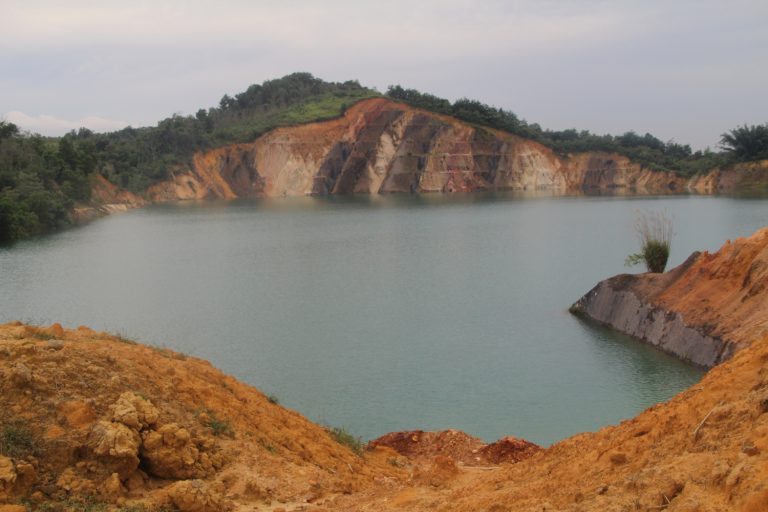 Water accumulates in an unreclaimed coal mine pit in Indonesia. Image by Tommy Apriando for Mongabay.

In Germany, the Wismut uranium mine created an environmental disaster and left more than 100 million tonnes of waste. But the area has now been converted into a large recreational lake area.

In North America, former mining lands in the U.S. have been transformed into solar farms and housing estates.

Canada has established the National Orphaned/Abandoned Mines Advisory Committee to improve the legislative, policy and program framework for addressing the 10,000 abandoned mines around the country.

“In Europe or the States there is a lot more experience with being a bit more creative of what post-mining land use you might target, because there’s a higher density population,”

“It’s immediately in your face. So you have these mine sites that become recreational lakes or theme parks or wildlife areas.”

“In Australia, we have little experience with relinquishing sites. But also, there are just not that many people.” 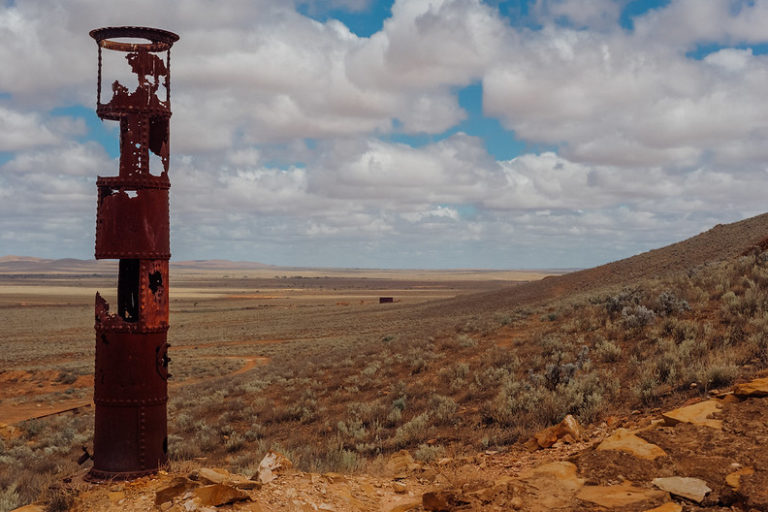 An arid landscape from the remains of the Waukaringa Gold Mine site in Flinders Ranges, South Australia. Image by Ian Hill/Flickr.

In Australia, responsibility for mine site restoration lies with the mining companies. Before any proposal for a new mine can be approved, the company must have a closure and rehabilitation plan in place. Then the plan has to be approved by the environmental protection authority. Most State governments also require a bond that would cover rehabilitation costs in case the mining company fails to comply with the closure plan.

Yet it seems not everyone respects it and citizens have to pay for the damage left by the companies.

“You can imagine that 14 years ago there weren’t very strict requirements on rehabilitation,” Kragt says.

“What we’re mostly dealing with now is the legacy of mine sites that have been operating for a long time.”

Kragt says that when the private company is responsible for the rehabilitation, the public value of rehabilitated land is often not taken into account. Restoration of biodiversity, water quality, habitat for native species or even recreational options for the public isn’t the company’s responsibility unless stipulated in the agreement.

”There needs to be a lot more clarity on who has the liability, how to develop targets and how to measure those targets,” Kragt says. 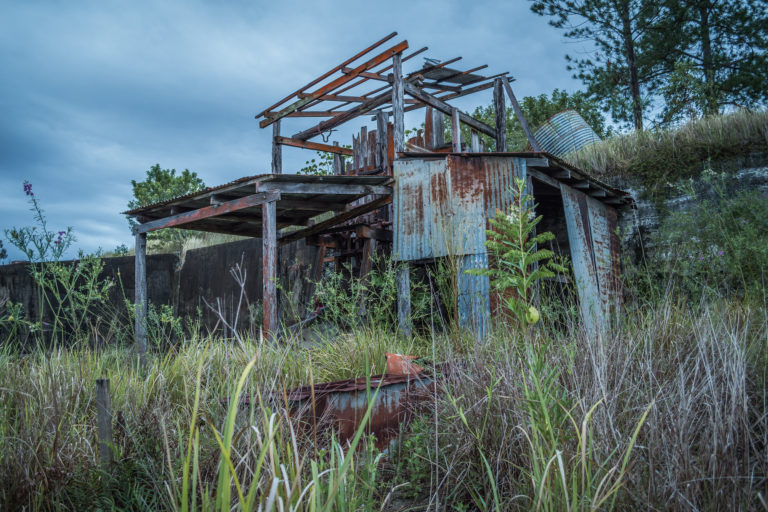 An abandoned gold mine in Queensland, Australia. Image by darkday/Flickr.

In Australia, one of the biggest environmental challenges in mining areas rehabilitation is the restoration of topsoil. In mine sites, topsoil, the first 20 centimeters (8 inches) of the soil profile, is disturbed. Topsoil holds nutrients, seeds and microorganisms.

Ideally, this soil should be set aside at the beginning of the mining then replaced when the mine closes. But stockpiling topsoil for years leads to soil degradation, erosion, reduced water holding capacity and increased salinity. Poor soil conditions hinder vegetation regeneration. Consequently, the fauna — microorganisms, invertebrate and vertebrate species — does not repopulate the denuded land.

“But usually [topsoil] is the best resource,” says Miriam Muñoz-Rojas, a UWA professor who has led one of the four programs of The Restoration Seedbank Initiative.

In the mining-intensive Pilbara region of Western Australia, Muñoz-Rojas and her team are studying a novel technique that involves the use of native cyanobacteria.

There has been growing research interest in cyanobacteria because of their potential in reestablishing soil functions of degraded land. Muñoz-Rojas’s team isolates cyanobacteria from soil biocrust indigenous to the Pilbara region. They then add them to reconstructed soil that consists of topsoil, overburden waste material, and natural soil from an undisturbed area. The presence of native cyanobacteria reestablishes soil structure and promotes retention of nitrogen and carbon, making the reconstructed soil fertile.

But the Muñoz-Rojas group has also discovered that treating seeds with cyanobacteria before sowing promotes the growth of some native species.

“Because there’s this association between plants and microbes, the idea is to try to bring back those plants,” Muñoz-Rojas says. “So microbial communities that are adapted to the soils are gonna be the best for promoting those plants.”

In a recent study, University of Queensland researchers identified a shift in priorities in the rehabilitation of Australian mined land in the past 40 years. The initial focus of mine rehabilitation and closure was exclusively on issues such as soil, landforms and vegetation within the mine site. But it later became evident that the effects of a mine extend beyond its boundaries. Most recently, there has been increasing attention on the socioeconomic impact on local and Indigenous communities.

Kragt says that consulting the local community is necessary when planning post-mining rehabilitation. “They may not necessarily want more national parks around them, they may prefer a recreational site, more agriculture or renewable energy, some other economic land use.” 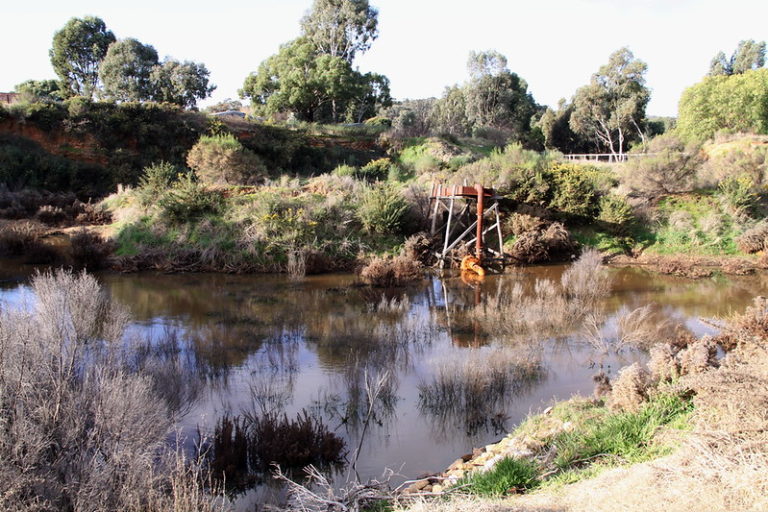 Goldfields in Australia. Image by Lettuce./Flickr.

Although mining companies in Australia generally do quite well in terms of informing communities, according to Kragt, currently mine closures are planned internally. Community engagement would mean to co-design the mine closure plan with the locals.

“It would require a complete change of mind and a different way of working. And, we’re definitely getting there,” she says. “The industry is moving that way. But it’s not there yet.”

An example of a successful community engagement project is the Anglesea coal mine, located along the iconic Great Ocean Road and about 120 km (75 mi) south of Melbourne, on the land of the Wadawurrung people.

Alcoa, the company that operated the mine for 46 years until the site was shut in 2015, is collaborating with The Eden Project, a U.K.-based educational and environmental charity, to transform the massive void into an entertainment and educational site. More than 800 people have attended community consultation events, and 3,000 people engaged online.

But while Anglesea is in a major tourism hotspot, most mining sites are in remote areas of the country, mainly inhabited by Aboriginal people who may simply prefer that the place be returned to its original landscape as much as possible, says Sarah Holcombe, a social anthropologist and senior research fellow at the University of Queensland.

When Newmont acquired Woodcutters as a legacy site in 2002, the company consulted with the Aboriginal community extensively in the post-closure and management phase. “They’ve made a pretty good effort to engage traditional owner groups in actively rehabilitating the site,” Holcombe says. “They’ve tried to have regular meetings to talk them through the science of the rehabilitation, and post-mining land use options.” Newmont did not respond to a request for comment.

Consulting Aboriginal communities presents its challenge, she adds. Indigenous cultures are deeply connected with the natural environment, and this often collides with mining companies’ business mindset. There is a communication gap between Western science and Indigenous knowledge, and a language gap because English is not always Aboriginal people’s first language. “It can be quite problematic,” Holcombe says.

In the Northern Territory, the Aboriginal Land Rights Act gives Indigenous people veto rights over allowing a mining company onto their land.

“But that’s the only jurisdiction in Australia that has that,” Holcombe says. Here, landowner groups are well resourced. They have anthropologists who help to bridge the cultural gap with visual media and storyboards, and interpreters for those who don’t speak English.

“There are still gaps, and we could always do better,” Holcombe says, but adds that things seem moving in the right direction.

Exploring the issues & technologies around mine closure

Decipher is now owned by