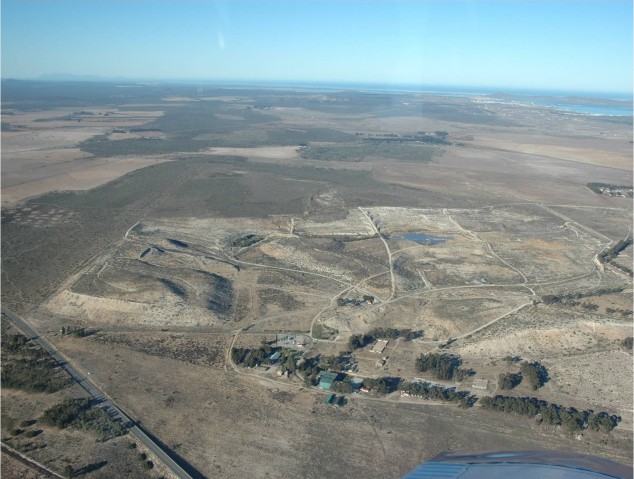 Millions of years ago the Berg River in the Western Cape Province of South Africa followed a different course to the sea. At that time, the South African west coast some 120 kilometres north of Cape Town had a more subtropical climate with lush, riverine forests and open grasslands and the Berg river carried down sediments that became phosphate deposits. It also had occasional flooding and conflict that resulted in animals such as sabre-toothed cats, short-necked giraffes, hunting hyenas and African bears being trampled under hoof and encased in mud that became fossils making the West Coast Fossil Park one of the richest fossil sites in the world with over 300 fossil species recorded so far. The deeply buried fossil deposits were uncovered during phosphate mining in the Langebaanweg area when the mine superintendent showed some visiting academics a small collection of unusual phosphate samples and bones that had been collected. The samples included the ankle bone of an extinct short-necked giraffe, which would later become the subject of the first scientific paper published on the site. From 1958 onwards major research was undertaken alongside the mining operations and in the early 1960’s, the mining moved from Baard’s Quarry to the nearby Varswater ‘C’ and ‘E’ Quarries.   When the decision was made to close the mine in 1993, the future of the fossil site was precarious. The normal procedure at the time of mine closure is to rehabilitate the land so that farming could resume, but that would have prevented access to the fossil bed. However, museum personnel, together with the then National Monuments Council managed to get a 14 hectare fossil-rich area within the mine property declared a National Monument Site in 1996, thereby securing the site for posterity. Subsequently the entire mine area, approximately 700 hectares, has been declared a National Heritage Site by the South African Heritage Resources Agency (SAHRA). Iziko Museums of Cape Town and Samancor then formed a public-private partnership to create the West Coast Fossil Park (WCFP), which was officially launched on 22nd September 1998, and at the same time excavation of the fossil deposits was resumed. The remains of several extinct short-necked giraffes, called sivatheres, were uncovered and left ‘in situ’ for public viewing. This first phase also included the renovation of the old Chemfos mine office block to provide a display area, lecture room, laboratory, offices, tea room, curio shop and research accommodation for a team of up to 12 people. Excavations at the Park were extended annually thereafter, and to date a total of 80 square meters of the fossil bone bed is open and available for viewing by the public. Researchers from all over the world come to South Africa to work with these collections at the Iziko South African Museum as they provide an important context for interpreting and dating similarly aged sites in other parts of Africa, as well as providing a unique insight into the climate and environment of the West Coast some 5 million years ago. In 2009, an application was made to the National Lottery Commission (NLC) for funding for a new museum and education centre at the WCFP. Funding of R67 million was awarded in 2010 and planning for the new infrastructure began in earnest in 2011. The funding paid for the construction of the new Visitor Centre, the artwork and exhibitions in the centre, equipment and furniture for the multi-purpose education/conference space and for the new restaurant and also for two new vehicles and new signage. The Fossil Park Museum and Education Centre was officially opened on 19th October 2018 by NLC Chairperson, Professor Alfred Nevhutanda.

“We are very grateful to the NLC for the funding of the Visitor Centre, but that was only phase two of our grand plan for WCFP. BHP have been great supporters in the past and we hope to continue this relationship in the future,”   Dave Mitchell, the chairman of the WCFP Trust told The BRICS Post.

Pippa Haarhoff, the manager of WCFP, said the site has vast potential, not only as a research centre, but also as the hub for ecotourism and community economic development, but this requires more funding from donors.

“This was a working mine, so we are lucky in that services such as electricity and water were already here. Together with SARHA the core fossil site has been protected with a buffer nature conservation zone surrounding the site. Over a 100 bird species have been recorded here. We are also protecting some of the last remaining naturally occurring fauna such as steenbok, duiker, porcupine, scrub hare and other small mammals. It is also a sanctuary for a large number of insects, reptiles and plants. A special project is looking at introducing more fauna such as quagga.

In addition we want to create a research institute that will focus on the earth and life sciences from the bedrock up to the present. This is a mammoth task, but will surely be well worth the effort.” she told The BRICS Post. The bottom line is that by being creative, the mining industry in the form of BHP, in collaboration with Iziko Museum of South Africa have created an inspiring legacy that will benefit researchers for decades to come, as the remaining fossil deposits are likely to harbour more exciting discoveries as further  excavations are undertaken.

Why is it important to preserve and study fossils?

Fossils are the hardened remains of life forms from thousands or millions of years ago, and include impressions of skeletons or leaves, or even footprints. The oldest fossils found are approximately 3.8-billion years old. Animals with hard body parts are most likely to be preserved by fossilisation, although the right conditions will create fossils from plant material. Completely soft-bodied creatures like jellyfish are unlikely to leave fossils. They’re all the evidence we have of what was happening on Earth before humans evolved to tell stories and record information, and they’re particularly rare because only a few things are able to be leave a fossil when they die, as most decay naturally. Fossils are created when living organisms are changed by outside forces such as heat and pressure, which triggers an organic process that leaves a carbon impression – also known as a fossil. This is how we know about dinosaurs; their fossils were created through a process called permineralization or petrification.

What do we learn from fossils?

Everything we know about dinosaurs, we know from studying fossils. Fossils have shown where certain dinosaurs roamed, what they ate, and whether they traveled in packs or were solitary. They have also revealed how some species evolved, depending on their location, and they have even revealed which species fed on others, giving insights into whole ecosystems. Scientists that study fossils also know which fossils appear in rocks that are likely to yield oil or gas reserves, helping companies identify new locations for resource extraction. Fossils aren’t just found anywhere — they require very specific conditions to be created — the West Coast Fossil Park is one such location that had the ideal conditions for fossil formation.

Coal by-product key to land and…

Sustainable social transitioning at mine closure…

September 5, 2021
Manage Cookie Consent
To provide the best experiences, we use technologies like cookies to store and/or access device information. Consenting to these technologies will allow us to process data such as browsing behavior or unique IDs on this site. Not consenting or withdrawing consent, may adversely affect certain features and functions.
Manage options Manage services Manage vendors Read more about these purposes
View preferences
{title} {title} {title}
Search

Hit enter to search or ESC to close

Your shopping cart
WooCommerce should be installed and activated!