How New Century has delivered economic mine rehabilitation

How New Century has delivered economic mine rehabilitation

The first mining lease in the region of Australia’s North West Queensland was issued way back in 1890. However, it was not until 100 years later when Rio Tinto’s exploration arm completed the discovery of “big zinc” that large scale mining become possible, hence they named it the Century deposit. This was sold on to Pasminco, which took the open cut zinc, lead and silver mine into production in 1997. While the pipeline and Port facility could handle a million tonnes per annum of concentrates, a slow floating ore body meant that Pasminco was faced with metallurgical challenges to optimise production and maximise returns from the operation. The choices available were to increase available residence time through building additional floatation capacity or increase throughput at the sacrifice of recoveries. The latter was chosen due to the lower capital requirements and the large resource available. This ultimately led to the substantial mineral resource in the tailings dam, and the opportunity for New Century.

During initial operations, Century was one of the world’s largest base metal mines, churning out an average 475,000tpa of zinc and 50,000tpa of lead in concentrate products over its history. Pasminco went into voluntary administration in 2001 due to numerous corporate issues and the Century asset transferred into a new entity Zinifex. Zinifex did extremely well when the zinc price skyrocketed in 2006 before being part of a merger that created OZ Minerals which, in turn, was acquired by MMG. The latter went on to run the Century mine site through until the exhaustion of the main ore body in 2016.

Explaining Century’s chequered past, New Century Resources’ Chief Operating Officer Barry Harris says the company was drawn to the asset when it came into care and maintenance. “Prior to this, our Managing Director Pat Walta had engaged with MMG over a number of years discussing a novel approach, that being an economic mine site rehabilitation strategy,” he says. “Partnering with New Century Resources (formerly Century Bull) was the best option for MMG to fulfil all of their obligations with the rehabilitation of the mine, returning it to a state where it could be handed back to the community, and making sure that together we could maintain our collective social license to operate.”

By March 2017 New Century had taken on the previous care and maintenance allowances, and proceeded to get the project developed and operations started through the remining and subsequent reprocessing of the tailings ore body, these activities are all part of the overall rehabilitation works and provide revenues to complete works required on the mine lease, while generating returns for shareholders. With A$70mn already spent by on waste dump rehabilitation, MMG had developed a best in class waste dump cover system for semi-arid environments that New Century can apply to the remaining dumps.

MMG also carried out substantial proof of concept test work prior to the transaction, determining that a saleable zinc product could be produced from the tailings, proving the viability of the Project. 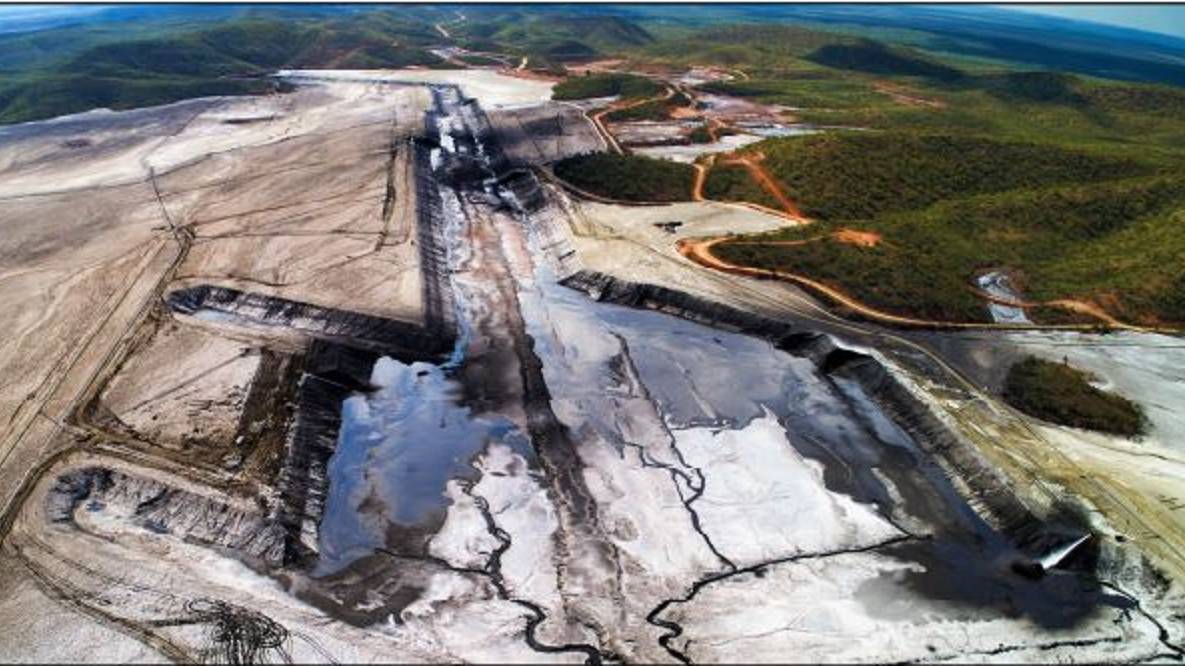 New Century was fortunate to have tailings sample results for the whole life of mine, and so were able to determine to a certain level of confidence what had gone into the tailings since first ore. However, “The first step for New Century when we took over was to convert the tailings dam into an ore body,” recalls Harris. “We needed to do that in order to achieve a JORC – compliant ore reserve.”

We were able to convert the tailings dam at Century into what was at the time, and still is, the 14th largest known mined zinc in the world – 77 million tonnes of tailings, containing 3% recoverable zinc with homogeneous grade distribution.

“We drilled out the tailings, using a quarter of the core for assaying to get a clear picture of what the whole ore body looked like, and what the grade profile was throughout the entire layered deposition in the dam,” reveals Harris. “The other three quarters of that core were sent off and used to complete a large pilot program; a test work plant was ran to see how we could further optimise the actual operations of the plant to extract as much zinc as possible. Between those two approaches, we were able to convert the tailings dam at Century into what was at the time, and still is, the 14th largest known zinc deposit in the world – 77 million tonnes of tailings, containing 3% recoverable zinc with a homogenous grade distribution.”

Harris explains that, though hydro mining is well established globally, it’s a method rarely used in Australia. “We’re innovating with rehabilitation of the mined land through the use of economic rehabilitation,” he explains.

“By making rehabilitation a profitable enterprise through what we’re doing, we’re carving out a niche in the industry, we see this as the future for improved environmental outcomes in the mining industry.

We’re utilising the best methodology to leveraging the sunk capital and time spent on world class infrastructure, approvals and permitting as well as the very ore body itself to monetise the value left behind in the tailings dam. After remining we’re reprocessing it, and then using subaqueous (below water) deposition to put it beneath the lake in the original pit shell. “Historically, aging mine sites have presented a long-term challenge in Australia and overseas jurisdictions. Our approach shows that mine sites no longer meeting the investment brief of top tier mining companies can still provide opportunity for more focused agile mining companies to come in and extend the economic life, while extracting a lot more value through the process of rehabilitation.”

Pumping new life into an old mine

The recommencement of economic activity at Century has involved significant engagement with and cooperation from the local community surrounding Century’s operations. “The Traditional Owners will continue to receive benefits associated with the Native Title agreement that would have otherwise ceased with the closure of Century by its previous owner,” explains Harris. “More widely the local governments will continue to receive premium benefit through rates, and other industries will gain through Century engaging with local businesses buying services and products from them.”

Meanwhile, through its port operations to support the mine’s infrastructure New Century is dredging up the channel at its Karumba facility, opening up economic opportunities to the sports and fishing industries, which otherwise would have been compromised by the silting up of the river.

Currently employing 350 people, New Century is also rolling out a A$1.8M per annum training and development program for the local communities in Doomadgee, Normanton and Mornington Island, which is assisting with sustainable community development goals identified by the community representatives themselves. “We took a different approach to how this was done previously,” explains Harris. “Previous owners used to spend a lot of that money training up people to be truck drivers, grader operators and other mining specific skill sets on the actual mine lease.What we have done differently is engaged with the local communities, and asked them what they actually want, which will mean more sustained benefit to the local communities, rather than just creating employees for the mining operation itself”. This scheme is being spearheaded by Shane Goodwin, our Head Of Stakeholder Relations and Community Engagement, which has been recognized through the Aboriginal Enterprises in Mining, Energy, and Exploration (AEMEE) Awards, and more recently the Prospect Mining Awards.”

The main focus for 2020 remains ramping up operations to 12 million tonnes per annum of tailings throughput through the existing infrastructure. To support this goal, New Century have embarked on a programme of infrastructure refurbishment to upgrade the hydro mine and processing plant. What are the plans for realising the future potential of zinc and lead resources at Silver King, South Block, and the East Fault Block? “Future mineral resources across the mine leases will be the subject of an executable feasibility study during 2020,” reveals Harris. “The potential to restart traditional mining operations at Century will be investigated further for economic viability, it’s then a matter of optimising when these resources fit best into the life of mine ore feed. Our current mine life extends up to 2026 and gives us a platform to then further define and bring into the life of mine the known in-situ resources. Everything that we do, be it open pit mining or underground, the final closure and/or rehabilitation of the land post any mining activities will be at the forefront of all the mine design and planning decisions made up front.”

Forging strong alliances has been key to the progress made so far at Century. “We partnered with National Pump & Energy and Paragon Tailings, who assisted in the development of our hydro mining operation, getting those off the ground and training up the workforce in how to actually carry out hydro mining operations,” says Harris. “We also partnered with Sedgman, which gave us a strong partner for the refurbishment, and with the operations and maintenance of our processing facilities both at Lawn Hill and Karumba. Sedgman is a well-known processing plant infrastructure company here in Australia, bringing a wealth of experience to the full refurbishment and helping us to get the project up and running in record time. Allied to this, we’re working with Murray Engineering, which supplies and maintains our mobile fleet, while P&O operates our 5,000 tonne trans-shipment vessel, the Wunma, out of Karumba.”

Operating for just over 14 months, Century is now among the top 15 zinc producing mines in the world and pushing for the top 10. “We’ve managed to attract a great team of people and have been working hard to foster a culture where our people enjoy coming to work and share the values driving our success,” affirms Harris. “As we stabilise operations at Century, and look at ways to extend the mine life, we want to be an example to other mining companies of the great things that can be achieved through economic rehabilitation and hope to see the process repeated elsewhere. It’s a huge opportunity to see mining through a different lens, not only here in Australia, but throughout the world.”

The true cost of mine closure according to ERM

Insurance for tailings dams and impoundments