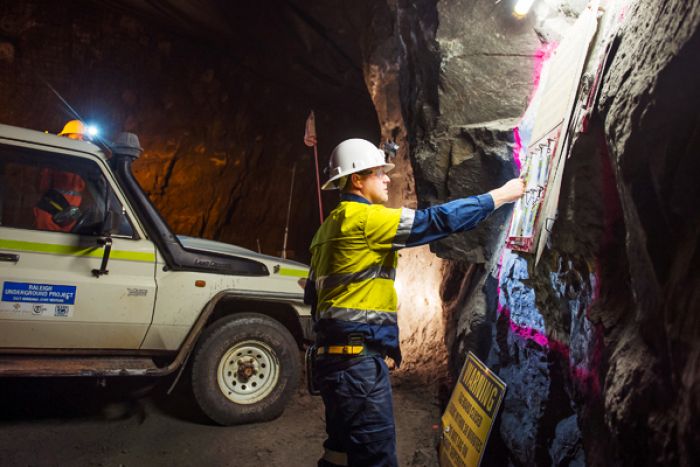 One of Australia’s highest-grade gold mines is set to close because of a “significant seismic response” caused by underground blasting.

It is the second major seismic event to hit Western Australia’s Raleigh operation in the past six years.

The Raleigh underground mine, 25 kilometres north-west of Kalgoorlie-Boulder, has produced more than 1 million ounces of gold and has enough reserves to sustain current production until 2026.

But at least two underground levels have sustained “substantial damage” from blasting last month, with significant mine rehabilitation required to re-establish access.

The ABC understands the seismic activity has affected an area about 400 metres below the surface.

Raleigh is jointly-owned by Australia’s second-biggest gold producer, Northern Star Resources (51 per cent), which recently purchased half of Kalgoorlie-Boulder’s Super Pit for $US800 million ($1.16 billion).

Minority shares in Raleigh are owned by Tribune Resources (36.75 per cent) and Rand Mining (12.25 per cent), companies both controlled by Anton Billis.

PHOTO: It has been recommended that the mine be placed in ‘care and maintenance’ from April. (Supplied: Rand Mining)

Statements released by Tribune and Rand to the stock market today said the “seismic response” occurred following the firing of stoping panels in the southern end of the mine.

“The southern mining area has been deemed unsafe and is now excluded from all underground activity,” the companies said.

“No personnel were underground at the time of the firing.”

Bill Beament’s Northern Star — which runs the day-to-day operations at Raleigh — has recommended the mine be placed on care and maintenance from April.

It is unclear how many workers would be affected by the closure.

The ABC has contacted Northern Star and the Department of Mines, Industry Regulation and Safety for comment.

Statements from Tribune and Rand said a detailed assessment would be conducted after the closure to consider the potential to resume mining.

Underground mining at other deposits at the East Kundana joint venture, which includes the Rubicon-Hornet and Pegasus mines, remains unaffected, the companies said.

According to Northern Star’s website, the Raleigh deposit was discovered in 2000.

Open pit mining began in 2002 and production headed underground in 2006.

In March 2014, as Northern Star was finalising its acquisition of Raleigh as part of a $75 million deal, the underground operation was struck by a 4.6-magnitude earthquake.

Multiple levels collapsed at Raleigh and several workers would have been trapped if they had not returned to the surface for a scheduled explosive blast.

It took months of rehabilitation work installing additional ground support before miners could re-enter parts of the mine.

The closure announcement comes as Northern Star and the minority partners fight in the WA Supreme Court.

In December, Tribune and Rand announced they were suing for alleged breach of contract relating to the processing of ore.

Northern Star, which made an unsuccessful $150 million cash offer to buy out Tribune and Rand in November 2018, said it would defend the legal action.

Since January 2013, all East Kundana ore has been processed in mainly monthly campaigns at the Kanowna Belle processing plant, 19km north-east of Kalgoorlie-Boulder.

Tribune and Rand allege Northern Star has failed to provide, in a “timely manner”, information it has requested relating to the treatment of ore, including the total amount that the Kanowna Belle mill can physically process alongside Northern Star’s other mining operations.

They also allege Northern Star has proposed an increase to the fixed rate treatment charge under the ore treatment agreement without providing information that justifies the rate change.

What is mine completion?

Mining is a temporary land use, therefore operators have a responsibility to enable safe post-mining land use after mining activity has ended. Mine completion means that mined land has been closed and rehabilitated to an extent that land can safely transition to future use.

What is a mine completion framework?

What are the 6 steps involved in a mine completion framework?

According to WABSI, there are six key components which make up a mine completion framework:

Find out more in Your Guide to Mine-Site Completion