Rehabilitation of abandoned mines offers lessons for the world

Rehabilitation of abandoned mines offers lessons for the world

Across the globe, countries are figuring out how to bring plants and animals back to abandoned mines. With as many as 60,000 such sites, Australia could offer important lessons.

Kakadu is the jewel in the crown of Australia’s national parks, but this unique wilderness is also home to one of the world’s largest uranium mines. The Ranger mine has been operational since 1980 but its time is drawing to a close; mining ended in 2012, and processing of the remaining stockpiled ore is expected to finish in 2020.

So what then for the mine site? It’s a question being asked with increasing urgency around Australia as the mining boom that has powered the Australian economy for nearly 15 years wanes. There are as many as 60,000 abandoned mine sites, some in otherwise pristine ecosystems found nowhere else on earth.

And Australia isn’t the only place dealing with mine retirement and subsequent rehabilitation efforts. In 2002, Canada established the National Orphaned/Abandoned Mines Advisory Committee, consisting of representatives from government, the mining industry, environmental organizations and Aboriginal communities, to improve the legislative, policy and program framework for addressing orphaned and abandoned mines, of which there are an estimated 10,000 around the country. Germany has also undertaken to rehabilitate some of its old mine sites, such as the lignite mine now transformed into a large nature and recreation area. The lessons from these experiences are being shared internationally at dedicated conferences, as nations grapple with their abandoned mine issues.

But Australia faces some unique challenges when it comes to rehabilitating mine sites, says Kingsley Dixon, botanist and John Curtin distinguished professor at Curtin University in Perth, Western Australia.

“We have an ancient flora developed on ancient soils, that has developed systems which don’t require large-scale migration because the systems have become inherently very stable over very long periods of time,” says Dixon.

The second challenge is that Australian mines are found in a diverse array of landscapes and ecosystems, many of them relatively undisturbed. “There are no off-the-shelf, ‘let’s-go-to-Bunnings [hardware store]-and-buy-the-packet-of-seed’ solutions,” he says. 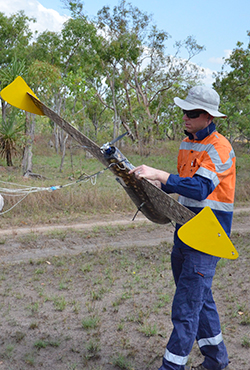 The biggest challenge for mining companies — who by law now bear the responsibility of rehabilitating their mines after closure — is restoring the topsoil to a mine site, says Peter Erskine, a plant ecologist and lead of the Ecosystem Assessment, Restoration and Resilience Program at the the University of Queensland’s Sustainable Minerals Institute in Brisbane, Australia. It’s also a vital step, Erskine says, because the topsoil contains most of the landscape’s seed stores. Ideally at the start of mining, this soil would be set aside, somewhere it won’t blow or wash away, until the mine closes and the soil can be replaced. That doesn’t often happen, though, Erskine says.

“Even though there’s known best practices, I haven’t actually witnessed them at too many sites,” he says. Instead, the landscape is recovered with spoil or recreated soils.

Fortunately, Australian flora aren’t too choosy. “A lot of Australian species are very tolerant to poor conditions because Australian soils are some of the poorest in the world,” Erskine says.

The next step is revegetation. The most common method is seeding, but this can require vast amounts of seed, sometimes millions of dollars worth. It’s also reliant on rain falling when and where it’s needed. In a country regularly plagued with extreme droughts — such as the one currently affecting large swaths of the eastern states — that’s far from a safe bet. An alternative is to use tubestock — young plants grown in pots to the point where they can be transplanted into the ground — but this is labor intensive and expensive.

Erskine says what commonly happens in forest rehabilitation is the overstory species — the canopy of the bush — is restored, but the mid- and understory are deficient, often because seed for these species can be harder to collect and therefore harder to purchase.

A forest is also more than just trees. There’s the fauna — microorganisms, invertebrates and vertebrate species — that call the bush home. Restoring fauna to a denuded landscape is not simply a case of “if you build it, they will come,” says Alan Andersen, a professorial fellow at the Research Institute for the Environment and Livelihoods at Charles Darwin University in Darwin, Australia.

Restoring abandoned mines comes with a lot of questions about what will and what won’t work. Here, trees are successfully coming back at the Ranger mine site. Photo courtesy of Alan Anderson

“If you’ve got a very large area that’s been disturbed and you rehabilitate the middle of it, and it’s a kilometer away from the source of fauna, most of the animals aren’t going to walk across the rest of the waste rock dump to get to the site,” Andersen says.

Not only is there relatively little research on how to restore fauna to a mine site, there aren’t benchmarks on what a good faunal restoration looks like. One of Andersen’s research projects is examining how to establish standards for vertebrate and invertebrate fauna restoration at the Ranger mine site.

“We’re very fortunate that there’s been a long history of surveying vertebrate animals — mammals, reptiles and frogs — at many sites throughout Kakadu over the last 20 years, so there’s a really good data set on what occurs naturally in undisturbed sites in Kakadu,” he says. But that doesn’t answer the question of how to get the fauna back there after the mine has closed.

The Ranger mine site sits within Kakadu National Park.

The Ranger mine may actually be easier to repopulate with fauna than some other mine sites, because it’s entirely surrounded by the incredibly biodiverse national park.

But in other areas, the choice is wait for the fauna to move into the area of their own accord — and there is as yet no understanding of how long this process might take — or try to translocate some fauna in and hope that the habitat is restored enough to support them. But Andersen points out that if animals don’t relocate on their own, it can be difficult to know if dispersal is the problem, or if the habitat is the problem.

Another issue with rehabilitating old mine sites is the legacy of acid mine drainage, or acidic, mineral-rich run-off from the mining operation. Anna Kaksonen, who leads the Biotechnology and Synthetic Biology Group at the Commonwealth Scientific and Industrial Research Organization (CSIRO), is looking to bacteria to help tackle this.

Her team uses naturally occurring bacteria that feed on the sulfates in the water, and in the process generate alkalinity that can neutralize the acid. These bacteria can also help recover any residual metals in the water. Kaksonen says the bacteria can be put to work in a number of ways, such as in a bioreactor or in permeable, reactive barriers that are put in across the flow path of groundwater.

While the technology is still in its relative infancy, “there’s growing interest in using these approaches, and since Australia has so many legacy mines and so many sites where acid mine drainage is an issue, I think there’s a lot of potential to use it more,” Kaksonen says.

In Australia, responsibility for mine site restoration lies with the mining companies, and regulatory oversight lies with various state bodies such as the New South Wales Resources Regulator. But Curtin University’s Dixon argues mine rehabilitation isn’t nearly as well managed as it could be.

“The legislative processes that protect the Australian people and the landscapes when a mining approval is given, appear now to be grossly inadequate to achieve what would be a publicly acceptable end product,” he says.

Even the mining industry acknowledges it has made mistakes in the past, although it is keen to put its best foot forward for the future.

“It’s really an exciting time. It’s not as if elsewhere in the world has got this nailed at all, and in fact, in many ways Australia’s leading in mine site rehabilitation.” –Alan Andersen

“The minerals industry recognizes that historic mining practices and absence of adequate regulation has resulted in abandoned mines that have not been appropriately rehabilitated,” says Simon Troeth, spokesman for the Minerals Council of Australia. “Progressive rehabilitation is part of the planning and consideration of rehabilitation and mine closure across all stages of modern mine development and operation.”

Some mines have done better than others; Erskine points to Alcoa’s bauxite mines in Western Australia as an example. “Alcoa’s been very careful with how they treat their top soil and over time invested quite a bit of money in working out propagation techniques for rare species,” he says. Alcoa monitors plant species on its mined sites, and, the company says, in 2001 achieved a target of 100 percent of species richness in mined areas.

For all the challenges, and the size of the task that lies ahead in restoring Australia’s many mine sites, Andersen is optimistic. “It’s really an exciting time,” he says. “It’s not as if elsewhere in the world has got this nailed at all, and in fact, in many ways Australia’s leading in mine site rehabilitation.”

To find out more about mine rehabilitation, check out our FREE guide here.

Find out how Newmont has rehabilitated the Woodcutters mine

The true cost of mine closure according to ERM

Insurance for tailings dams and impoundments